Quentin Lecocq: “When I found out my research was a success; I was in awe”

Quentin Lecocq is 27 years old and is currently doing his PhD in the Laboratory for Molecular and Cellular Therapies in collaboration with the In Vivo Cellular and Molecular Imaging lab runned by Professor Karine Breckpot and Professor Nick Devoogdt respectively. Nick is part of the Immune-Image project and his co-promotor. During the first Lab Meeting of Immune-Image Quentin talked about the results of his research. In this study, he generated and characterized nanobodies as tools for nuclear imaging of the immune checkpoint LAG-3. For our series ‘meet the person behind the researcher’ we interviewed Quentin about his research, his passion for science and himself. 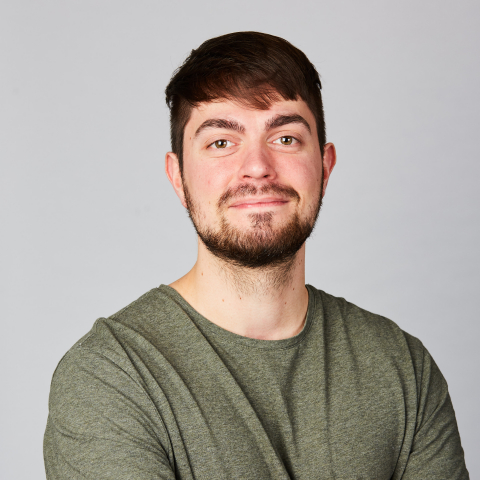 How exactly did your curiosity for science and biology start?

“My motivation for cancer research was trigerred when my mother was diagnosed with breast cancer. Being a 16-year-old at the time, I was saddened by the idea of being unable to help my mom getting rid of this awful monster. Luckily, doctors gave her some treatment options: excising the tumor or heavy chemotherapy and radiotherapy, preferably both. That is when I started being curious about other ways to treat cancer. My aspirations were further shaped after watching the film adaptation of the book ‘I Am Legend’ by Richard Matheson. The main actor was a scientist performing experiments on rats he housed in his cellar. Watching the scene of him finding a cure against a horrible virus was so inspiring. It became clear to me, I wanted to become a cancer scientist. After studying biomedical sciences at the University of Brussels, I first got in touch with cancer research during an internship at the university hospital of Sheffield, UK. I fell in love with the profession (smiles). ”

How did you get funding for your research project?

In 2016 I started my cancer research with a publicly funded ‘Kom Op Tegen Kanker’-grant based in Belgium. After one year I applied for a FWO government grant which should continue to fund my research. “I had collected a lot of scientific data that first year to have a strong basis to back my hypothesis. In my second year I defended my project in front of the multidisciplinary jury of the FWO. Honestly, this was one of the most stressful moments of my life. But in December 2017 I heard the news that I received the four years funding for my project. I was so grateful to get this opportunity. Today, I have one year left of funding, but I have chosen to already finalize my PhD thesis.”

What was your research about?

“The past four years I worked on developing a nanobody, which is a small binding protein derived from antibodies found in animals such as lamas, alpacas, dromedaries and sharks. It is a very intriguing format because nanobodies are ten times smaller than conventional antibodies that we can find in the human immune system, which makes them very potent in penetrating dense tissues like tumors. Although being small, they have a high affinity to the protein they bind to. As part of my PhD project, we wanted to use those nanobodies as nuclear tracers to image the immune system and more particularly a protein expressed on activated immune cells which is called LAG-3.”

What exactly is LAG-3?

“LAG-3 is a protein expressed on the surface of the membrane of e.g., activated T-cells. T-cells are part of the immune system and they are known to have the ability to detect and destroy cancerous cells. When LAG-3 interacts with cancer cells it results in inhibiting proper function of T-cells. Thus, the cancer cell can protect himself from an anti-cancer immune response. In other words, the cancer has the ability to continue growing because it has found a way to hide from the immune system so it can keep on growing.”

Can you tell us something about immune checkpoint blockers?

“There really is a hype on the use of immune checkpoint blockers in the treatment of cancer patients.  Besides the well-known immune checkpoints CTLA-4 and PD-1/PD-L1, LAG-3 is considered as the third immune checkpoint targeted in the clinic. If LAG-3 is blocked on the surface of T-cells, the inhibitory signal that the tumor gives to the T-cells is blocked. By removing the brakes on your immune system, you allow it to eradicate the tumor. However, not all patients benefit from these immune checkpoint blockers. We wanted to noninvasively visualize LAG-3 in order to predict therapy outcome. In other words, the likelihood of a cancer patient to react to LAG-3 blockers is higher when LAG-3 presence can be confirmed with noninvasive imaging.”

Is your heart in the lab or more business-oriented?

“My heart is definitely in the lab but during my PhD I tried to not solely stick to the scientific part. I learned that having a great developed technology is one thing, collaborating with the industry requires totally different skills. Promising drugs can be wrongfully disregarded when not communicated well enough. Even in 2021, it is still a very important and a very difficult part of the development of drugs. So, I signed up for different courses about presentation skills, entrepreneurship, IP protection, innovation in healthcare, etc. So, the research is in my heart, but my mind says I have to continuously learn and improve my skillset.”

What was one of the biggest lessons your learned during your research?

“You could say that I had difficult times at the start of my project when many experiments failed. I learned to begin every experiment with an open mindset and to look at the results in an unbiased way. Still, there were many frustrating moments. You always want to bring good news to your PI’s, but sometimes it’s better to reflect on the problem first and propose a solution or alternative.”

Which difficulties did you encounter during your research?

“I encountered some difficulties throughout my project but I’m happy I did because it helped in creating a problem-solving mindset. Being able to resolve these kinds of issues is something I do not take for granted. As an example, I struggled with the purification of the nanobodies, which were produced in bacteria. We didn’t really have the proper tools to do so in our lab, but since we planned to inject these nanobodies in mice, I did not want to comprise the purity of the nanobodies. So by pro-actively asking for advice, ordering the right equipment and optimizing protocols I was able to get my nanobodies purified. The end results were worth the struggle.”

And what about your successes?

“You completely forget the bad feeling about all previous failures once you start getting some positive results. One particular experiment was when we measured tumor sizes of mice treated with combinations of antibodies blocking the immune checkpoints LAG-3 and PD-1. I always asked a colleague to come with me during the tumor measurements to ensure an unbiased view. He mixed the cages because I did not want to know which mice belong to what group. My colleague had the labels in his hand and wrote down the sizes of the tumors as I measured them. After measuring for some time, it was clear that one group was doing really good, one group doing really bad and two on average. My colleague then said ‘congratulations’, your Phd project, your hypothesis, is partly done. Without looking at the data, the fact that he told me this: I was in awe. Yes, finally something good! And for the record combining LAG-3 and PD-1 blockade was the group doing really good.”

You have decided to stop your research. What’s next?

“Yes, that is correct. I have actually one year of funding left, but I have chosen to finalize my PhD and go for a new challenge. As much as I would like to continue with the development of our technology, I feel like expanding my knowledge about the process of bringing effective and safe drugs to the clinic. Recently I was accepted for a Blue Book traineeship at the directorate general for Health and Food safety of the European commission. I’m convinced about their important role in our healthcare system. It is no coincidence that the European Union supports collaborative research like your Immune Image project, which I really believe will have a huge impact on predicting therapy outcome of patients.”

Would you like to know more about Quentin’s research? Have a look at the results he presented during the LabMeeting. Or send him an email at quentin.lecocq@vub.be.